This futuristic looking coupe was unveiled in 1985. It was sold in US, Europe but also in Japan under the name Alcyone. This great piece of automobile symbolizes itself the 80’s with its stunning asymmetrical steering wheel, digital instrument cluster and of course the pop-up headlights. Engineers worked hard to give to this coupe a pretty good aerodynamic coefficient at Cx 0.29. Thanks to a turbo engine, a 4WD transmission and an air suspension, this marvellous car was really well equipped at that time. 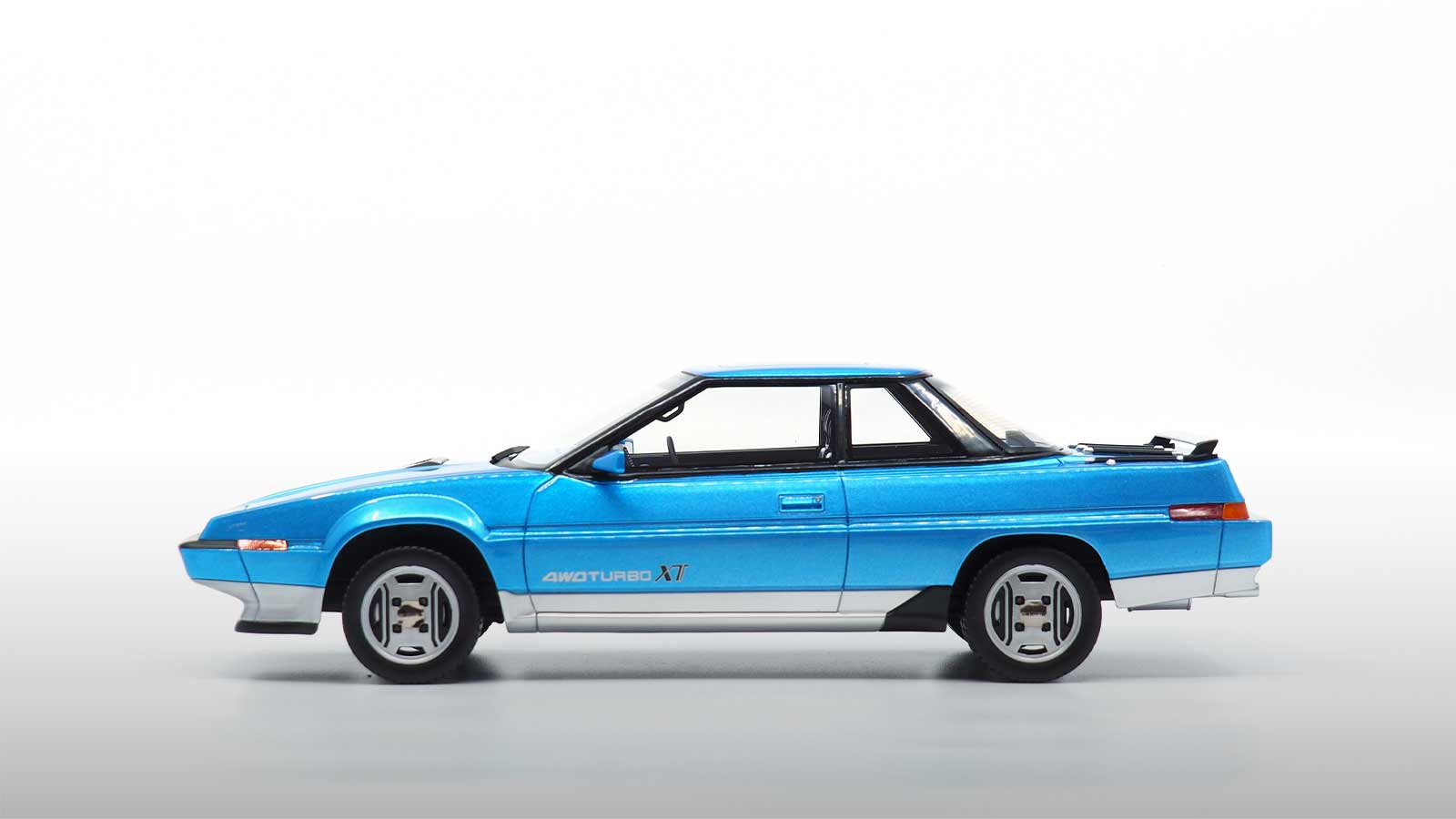 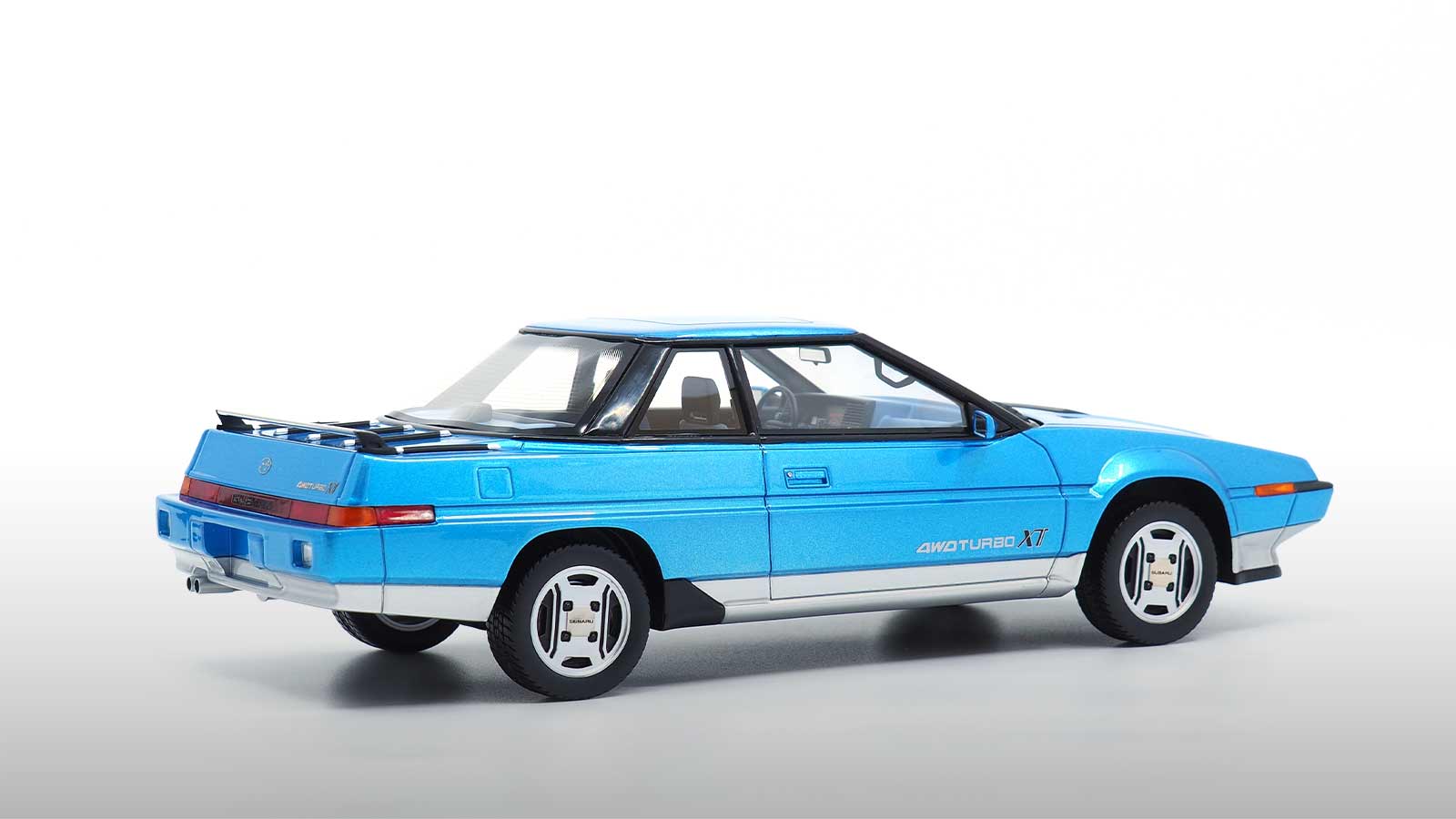 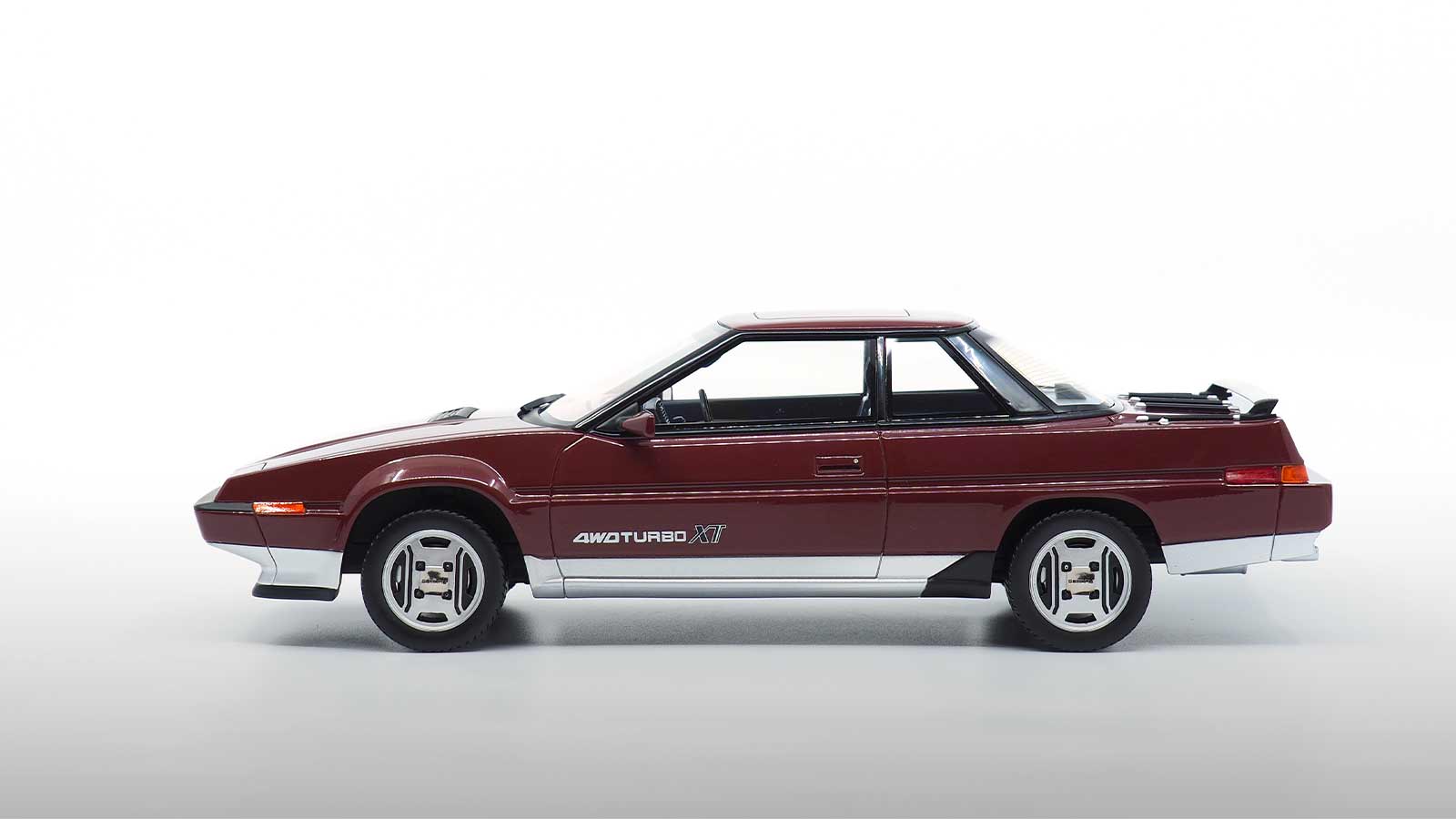 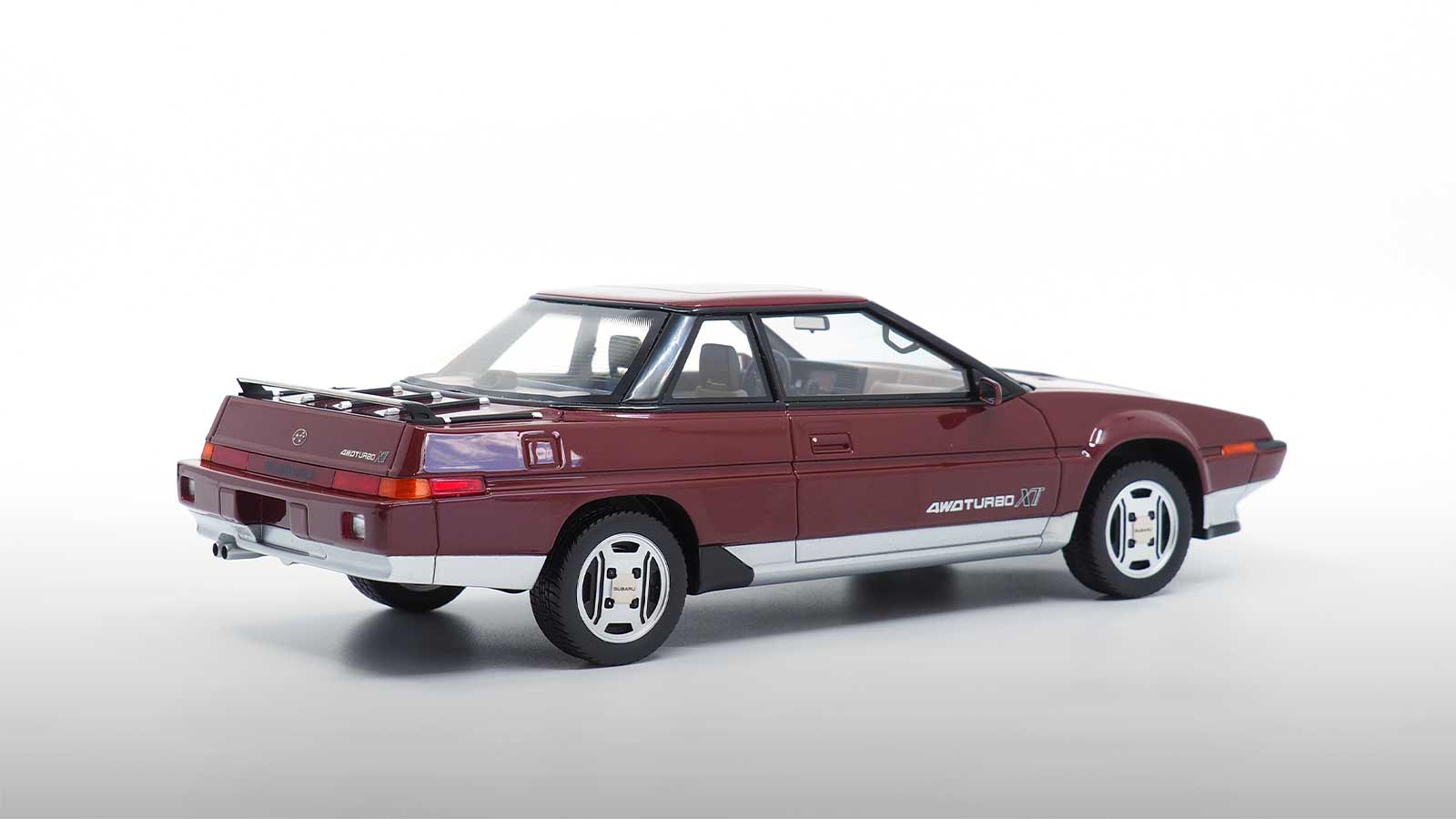 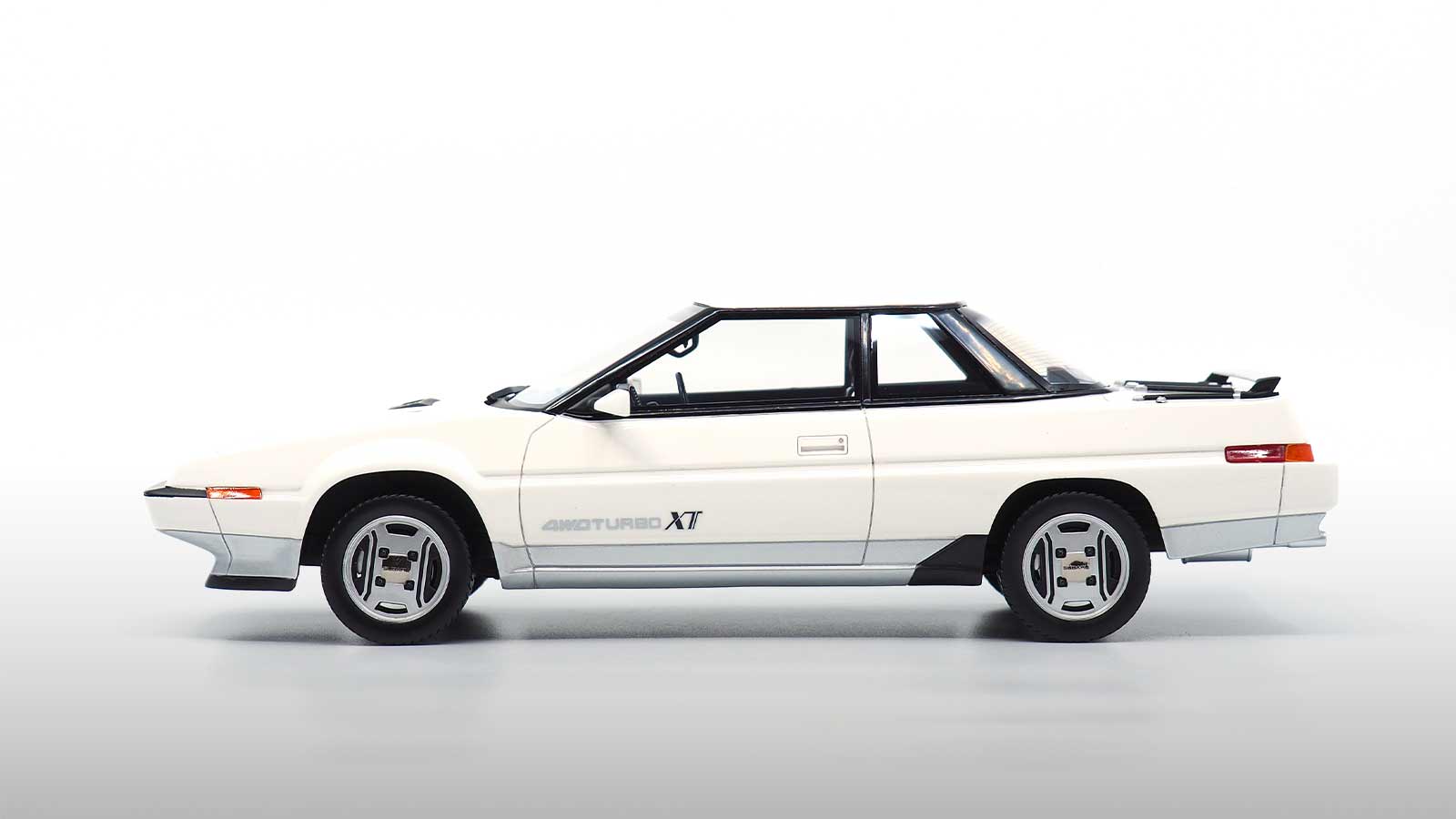 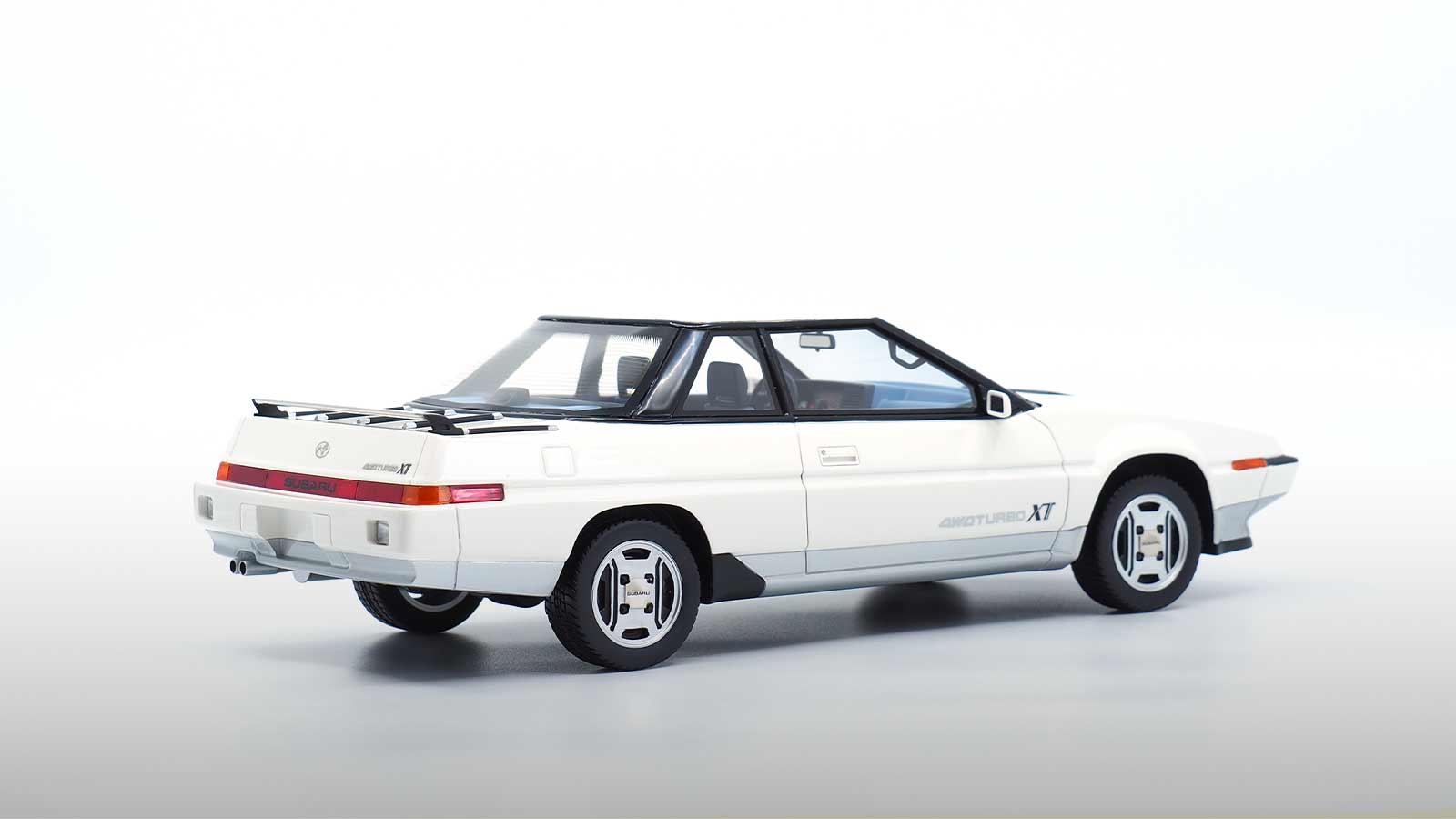 The Subaru XT Turbo 4WD is a DNA Collectibles Exclusivity at the 1/18 scale. Get your very exclusive and limited edition Subaru XT 1/18 scale model car from DNA Collectibles in top quality. Celebrate the history of Subaru and add this gorgeous coupe to your collection! Don’t miss this remarkable piece of the 80’s!

We would like to start this description by being 100% honest with you: replicating the Subaru XT 4WD Turbo at 1:18 scale was so complex ! But it was totally worth it when we saw the final product in our hands. Let’s see together more in detail where the difficulties were and how we managed to handle them.

First of all, we need to highlight the 3 color tones level of the exterior of the miniature car:

Also known as the very first Subaru’s coupe car ever made, we decided to reproduce the US version in its left hand drive version and with the side front and rear lights compliant with the US regulations.

The Subaru XT is a sporty car, and sporty means a special aerodynamic treatment regarding the design:

Do you feel the “fierce attitude” of the Subaru XT 4WD Turbo?

Let’s focus on the front of the car for a bit. Every aspect of the real car is perfectly replicated to be as realistic as possible such as the typical front grill below the Subaru logo and the air intake on the hood to let the engine breathe some fresh air.
Moving now to the sides of the miniature car, you cannot miss the massive “4WD Turbo XT” inscription on the doors whose only purpose is to proudly show off the true power of this Subaru.
The classical square designed 4x140 bolt circle diameter rims, used as well on other Subaru models like the Leone or the Brat, are shining up to your eyes for an astonishing high end rendering.
The rear of the 1 18 scale model car features a matt aluminum double exhaust pipe, the “Pleiades star cluster” Subaru logo and the “4WD Turbo XT” inscription, and finally the typical Subaru rear light bar also used later on the Subaru SVX model.

Time to talk about the cockpit and the interior of the car in general. We were quite challenged by the complexity and the requested level of details in there! The combination of dominating light & dark blue colors embellished by the white checkerboard pattern on the front and back seats is just a delight.
Can you feel the typical spirit of the 80s when you look at the quite busy dashboard? For each single function, a button was implemented… And we didn’t miss any! In addition to the standard commodos integrated to the steering wheel, 9 more buttons were implemented on each side of the instrument cluster! When you think this is enough, we find new ones to control the air vents between the two front seats… The more, the better!
The futuristic (at the time) digital instrument cluster integrates orange gauge lights and an amazing aircraft-style artificial horizon effect. That’s not the only aircraft reference in the Subaru XT, the gear selector also looks like an airplane instrument.
DNA Collectibles was also very accurate regarding the central console counting a digital clock on the top, a tape player in the middle, and a radio at the bottom.
Instead of moulding everything into one massive block, we prefer to add several separate parts to be as meticulous as possible such as:

We consider this is the best way to respect the collectors, our customers and the car itself. That’s also why we applied photo etched parts to reproduce the speakers and the buckles of the seat belts made of real fabric. 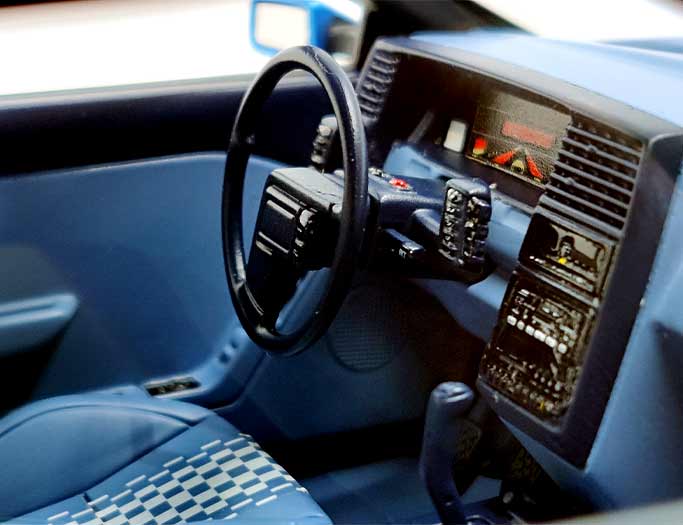