Unveiled at the Bruxelles motor show 1960, Volvo surprised the world with an elegant coupe 2+2. At first produced in the UK, in 1963 the production had been transfered in Sweden. With the 1.8l and 100hp, this car was not meant to be the fastest car, but it drove very well. Did you know that Irv Gordon made more than 3 million miles with his P1800? It is still the record today. This car was also famous due to her apparition in the TV show “The Saint”, where Roger Moore drove one. Our model Volvo P1800 at 1/18 scale is an exact copy of the emblematic swedish car. This car became famous all around the world in the sixties as Roger Moore’s car in the TV Show “The Saint”. The very first 1961 Jensen version of the P1800 is a DNA exclusivity! Please watch our pictures and video, check the beauty of the shape and the quality of the interior.

The Volvo P1800 can be classified in between the Touring and the Sports car, only about 47'400 cars were produced and sold during its lifetime.

Would you like to read about the vibrant history of the P1800? Believe me, it worth it...

Volvo first thought about the P1800 project back in 1957 when the car manufacturer was looking for a sports car that would be competitive in the US and European market after the fail of the P1900 (only 68 cars sold). To meet this goal, Mr Pelle Petterson started to work on the first 3 prototypes (P958-X1 / P958-X2 / P958-X3) under the tutelage of Pietro Frua, the famous italian auto stylish at carrozeria Ghia.

Fun fact, Volvo first insisted hardly to credit the design to Pietro Frua, that's only in 2009 that Pelle Petterson was officially recognized as the P1800 author.

The childhood of the P1800 was "foggy" between 1957 and 1960. After several failed attempt to build the car in cooperation with different manufacturer (Karmann, NSU, Drautz and Hannomag), the car was finally presented to the public in January 1960 at the Brussels Motor Show and the production started the same year to be sold in 1961 by finally using the Jensen Motors production lines which were under-utilised at the time. This was definitely a win-win contract between Volvo and Jensen who agreed to a 10'000 cars' deal.

The Volvo P1800 became very famous during the 60s thanks to the TV show "The Saint" staring Roger Moore as the main character Simon Templar.

"I have a great affection for the Volvo P1800, as, of course, I owned one, as well as used one in the series. It’s a beautiful car and I still drive a Volvo to this day." Roger Moore 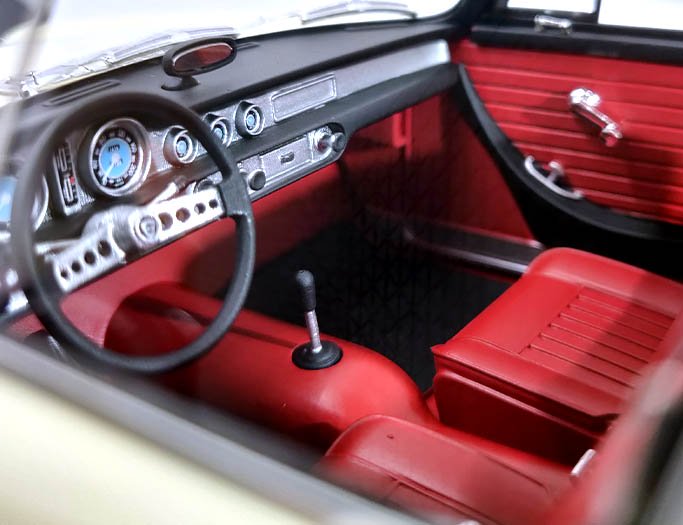